Schools are officially back in session. That means school security teams across the country are looking at how to maintain and enhance their security systems, all the while wrestling with a multitude of challenges including budgets and equipment upgrades (never mind dealing with the unpredictable behaviour of kids).

For many school security teams, it can feel like they are stuck with their existing solution, because fixing issues is going to blow the budget and interrupt security provision for pupils and teachers. In this blog, we look at 4 common problems that school security teams report, and why fixing them might just be easier than you think.

1: Video delays slow down the response of school security guards, so they can’t react quickly to events

A common issue for school security systems is that video broadcast delays mean operators in the control room aren’t seeing video in real time. Often, this delay comes from a system being set up on a centralized architecture, where video transmits from the camera to the recorder and onto the Video Management Software (VMS) which the operator is managing in the control room.

Many security teams who have been using the same system for years think that these delays are an inevitability; but that’s just not true.

Distributed Network Architecture means that you don’t need to rely on your central server to transmit video. Camera images can bypass the server altogether and go straight to the VMS, which reduces transmission delays to milliseconds. In the security scenarios that really matter, a two-second head-start can be a huge advantage when trying to save lives. If your team can respond faster because they’re watching video in real time, you can avoid more serious consequences.

2: Lack of access to recorded footage means that the school security team is unable to investigate reported incidents

A large number of tasks for school security guards are based on investigating past incidents, such as locating lost or stolen belongings or identifying the source of graffiti or vandalism. Issues can arise when trying to locate the relevant footage, because it may mean trawling through hundreds of hours of footage from school security cameras to identify the moment an incident occurred. And that’s if you have the footage stored in the first place.

Some older school security systems are using outdated hardware which simply can’t store enough footage, so incidents from more than a couple of days ago can’t be investigated at all.

Upgrading recording hardware to the latest Network Video Recorders (NVRs) can enable school security teams to store as much footage as you need from all of your cameras, with no reductions in system performance. Using a powerful VMS provides extra features which allows operators to isolate relevant footage faster: for example, with a storyboard function which can combine events and footage clips together, export clips faster and facilitate event searches.

3: Video Management Software seems out of date, but the cost of a new school security system is beyond budget

Security upgrades can seem daunting when operators know how to use your existing system and you’re concerned about interruptions to security provision. Not only that, the cost of school security systems may mean it’s just not an option for you.

This is not necessarily correct. Technologies have advanced so much in recent years that there are much better school safety options. Researching the products available can identify software platforms, such as IndigoVision’s Control Center, that are renowned for being intuitive for operators to manage from day one.

Additionally, upgrading your VMS can make it seem like you’ve installed new cameras. Rick Spillane, VP of Sales in North America for IndigoVision, has experienced this first-hand:

You're able to bring existing cameras into updated software. This increases the functionality of your existing cameras. School security teams think they’ve had new cameras installed when they have a demonstration.

Even better, by subscribing to an annual Software Upgrade Plan, you’ll never miss the latest upgrades which ensure your system protects staff and students, whatever happens.

Sometimes, visual footage from your system isn’t enough to ensure safety and security in schools. For example, security operators might not notice an irate parent entering reception on cameras; however audio features integrated into school security cameras can send alerts to notify operators of unusual noise levels.

The situation at reception can be swiftly dealt with, minimizing the disruption to children learning elsewhere in the building. Instead of replacing hardware to do this, you can integrate a speaker into your existing cameras, which allows you to hear what’s happening and take appropriate action.

Furthermore, installing loudspeakers on playing fields or the perimeter fence can help security operators working the night-shift to protect the school from vandalism and break-ins. Instead of moving from their desk and leaving other areas of the site vulnerable, they can simply activate a voice announcement which plays through the loudspeaker to deter the individuals. If that works, the security operator can resolve the situation quickly and efficiently, without involving the police.

If you recognize one or more of these issues with your school security system, don’t worry: they can be easier to fix than you think. Read our guide for more details on the options available. 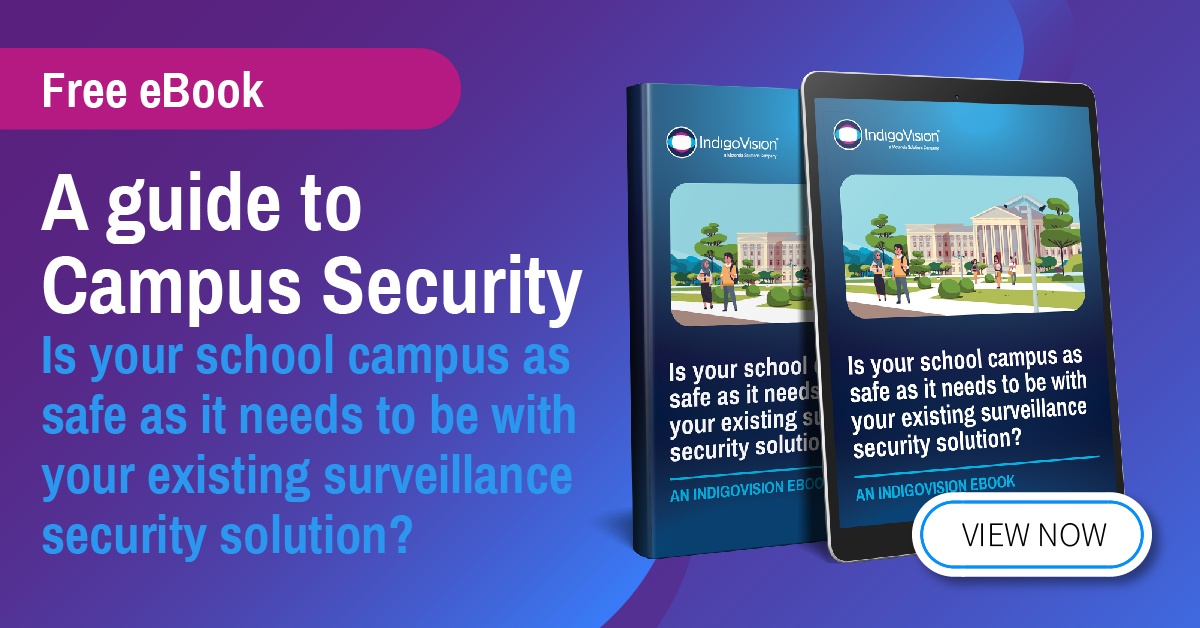 If you'd like to speak to an expert about updating your school security system, contact us now.