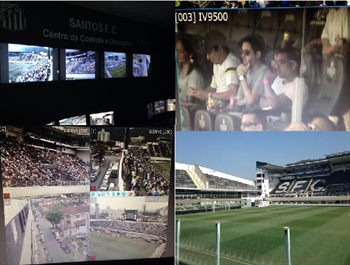 How can you enjoy your football if you don't feel safe?

In a country obsessed with The Beautiful Game, Santos and its Sao Paulo stadium, the Urbano Caldeira, hold a special place. It is Pelé's home club. When Santos decided security and safety arrangements needed upgrading to protect its players, fans and its reputation, it picked IndigoVision.

Santos FC's existing arrangements didn't have the visibility or flexibility to achieve full security. Some might have junked the old system and started a new. But by upgrading their existing security solution and integrating IndigoVision's, a whole new level of flexible security was achieved---along with significant savings.

"This partnership with Santos FC provided the creation of a Situation Room. There is equipment used at the most modern stadiums of the world today, and this allows Santos to have FIFA's standard, which we call 5 balls for stadium, this is one of the requirements, and Santos is now prepared to meet those requirements." Maxwell Rodrigues, CEO of Ergos Group, a partner of IndigoVision in the modernization of the Operation Controlling Center of Santos FC in Vila Belmiro.

Prior to the upgrade the image quality was so poor that it was difficult to identify the brands of cars parked just outside the stadium. So to improve the visibility, high resolution IndigoVision PTZ cameras were installed to replace the existing analog PTZ cameras. (Now license plates can be easily read. Faces can easily be recognized.) In addition, 22 BX600 HD Bullet cameras were added to improve visibility. While 123 existing analog cameras were brought to IP standard and integrated within the new system, all via the open system of IndigoVision encoders. All of this was made possible on the existing network as a result of IndigoVision's H.264 image compression.

We play as a team, not a collection of individuals.

Due to the flexibility of Control Center, IndigoVision's security management software, all cameras can be monitored from multiple locations.

Coupled with Map Based Monitoring and Pursuit Mode, Santos FC's operators can track events from the access streets to the stadium, from the stands, from the turnstiles to the pitch, from camera to camera.

"Besides the Operation Controlling Center, the Situation Room that was implemented will be used not only by the Military Police, but also by the entire security area of Santos FC in order to plan and secure the places where most of the incidents happen for the future events in Vila Belmiro" - Maxwell Rodrigues, CEO of Ergos Group, a partner of IndigoVision in the modernization of the Operation Controlling Center of Santos FC in Vila Belmiro.

Playback features such as Smart Search and Thumbnails make Control Center an even more powerful security tool: existing footage can be viewed and exported far quicker. Built in analytics such as motion detection, virtual tripwire and ACF+ help save storage by dropping the framerate. When no motion is detected it drops to 1 frame per second. With motion it ramps up instantly to 30 FPS. The system catches the action, not the waste.

"Our home is now safer, providing a great service to the public that attends Vila Belmiro. Security is our focus and this is very good to all the people who come to Vila Belmiro" - Modesto Roma Jr, President of Santos FC.

Pelé's Club is in safe hands.

Our systems offer end-to-end security with no single point of failure, and market leading compression to minimize bandwidth and reduce storage.

Performance, stability and flexibility are insured by Distributed Network Architecture (DNA). Integrate any number of additional devices from us, from third parties, or upgrades from your old system.

And when you choose an IndigoVision system today you are future-proofed. The equipment and system we will still support for many years to come.

IndigoVision lets you see everything everywhere.

IndigoVision. Safe Is A Wonderful Feeling.